First of all gave me another chance to get together with my pal Hector Sanchez in New York City. After having a nice dinner, we went to the Helen Mills Theater, which is a very intimate venue on 26th between 6th and 7th Avenue.

Before the show started, those in attendance were treated to Red Carpet festivities with Raven De La Croix, one of the stars from The Last Empire and three Buxom beauties from Codename: Diablo. It was quite enjoyable meeting with the actresses and Writer/Producer of Codename: Diablo Dre Ys, who was also present. I have to mention that I truly enjoyed speaking to some people who like me appreciated what these movies had to offer. 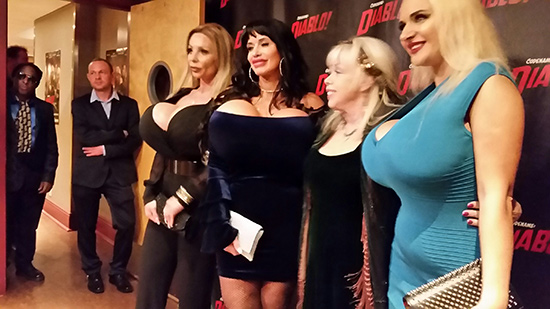 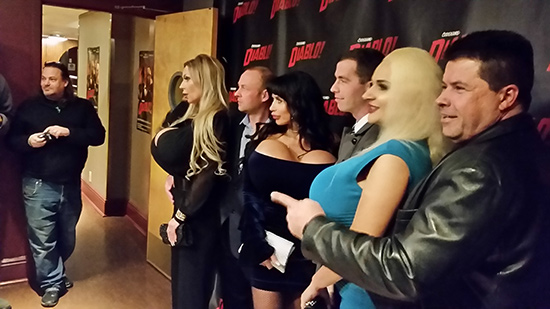 The three big-bust ladies from Codename: Diablo Lilly 6K (use to be 4K), Mary Madison Love and Dolly Fox made quite a grand entrance with their supercharged curves and matching attire. You couldn’t help but be impressed by what these bosom babes brought to the special event. It’s not everyday you see huge-bust queens like these three.

Watching Codename: Diablo was a gas. It was a funny film that combined not only Russ Meyer-like buxom women, but implemented James Bond antics, mixed with Benny Hill humor set against modern day technology environment.

From the get-go I was totally entertained. Lilly 6K (who changed her name for obvious reasons) makes an unforgettable impression in the first scene with her extraordinary look.

Just when you think Lilly 6K has no escape in Codename: Diablo, the stunning brunette works her magic
What appears to to be a dire situation, she’s trapped on a yacht with a group of gun wielding frogman, is quickly reversed as the huge boob star uses her considerable assets to pull the rug from under their feet and turn the table.

Martina Big, who was not in attendance, joins her co-star to getting into the action-packed amusement. The stacked German model adds humor to the proceedings, probably unintentionally with her heavy German accented voice. 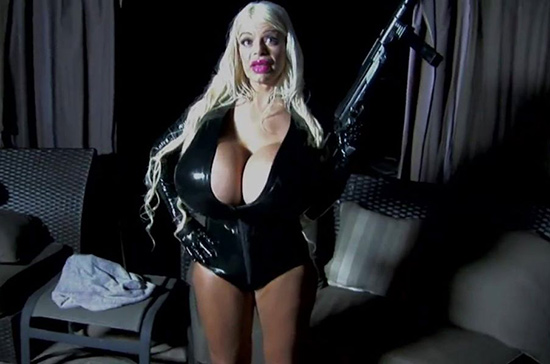 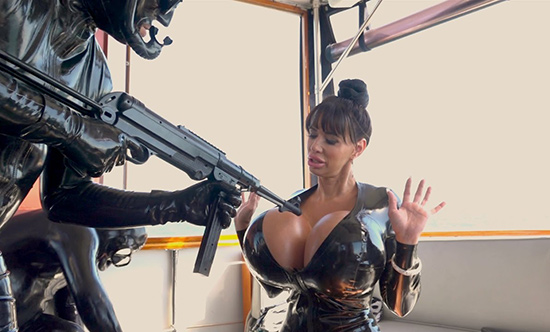 Hungarian model Mary Madison Love was not to be outdone. She brought her striking European exoticness to the shenanigans and made the whole experience much more pleasurable.

Publicist Supreme Shade Rupe with Codename: Diabo Writer/Producer Dre Ys Photo Terry Wickham
I had a great conversation with Writer/Producer André after the show. I asked him how he came up with the all the noteworthy elements that made up his film. He told me that he just wanted to make a movie with things that he’s passionate about.

Huge breasted women utilized as the leads with Benny Hill comedy set amongst James Bond-like action, with many layers of multi-national accented speaking roles who were all mostly in tight body fitting latex costumes were his essential components.

I could not help but admire Dre Ys’s approach because it made Codename: Diablo distinctly his. He didn’t play by the rules commonly used by Hollywood, which whitewashes pictures based on today’s homogenized political correct standards. I find his approach courageous and I love that he’s not afraid to admit what interests him. The fact is hardly anyone is making movies with actresses with super-sized boobs and Dre Ys is helping fill that void with the immeasurable cleavage seen in this movie.

I took delight in meeting Lilly 6K afterwards, I found out the brunette atomic bombshell was from general area of the country I grew up. I told her that whenever she was on the screen she definitely commanded it, not only because of her astonishing look, but her voice was the easiest to understand and to follow. 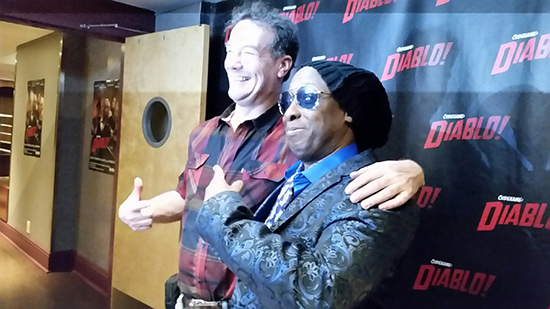 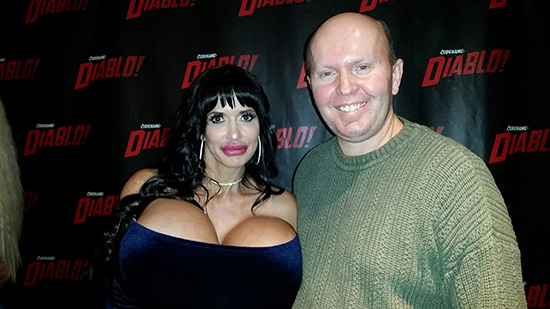 I worked big-bust superstar SaRenna Lee and some other chesty actresses in my career so far, but Lilly 6K takes the cake as the largest breasted model/actress I’ve ever seen in person.

Mary Madison Love is not only a head turner but she has a demure quality. I’m not sure comes from this being her first movie, her grasp of the English language or just reserved personality in front of a crowd of people. One cannot help to notice that her waist to rest of her body is remarkable.

Dolly Fox, who actually was not in this movie, but will be in the next installment of Codename: Diablo, is a vivacious blonde who most definitely has a great energy about her. I’ve been around enough actors during all my years of writing about movies and making them myself. She’s got glow about her that the camera picks up.

Her smile and outgoing warm personality lights up the room. In the Q & A, we learned that Lilly 6K recruited her from a convention earlier in the year and I think that bodes incredibly well for the next sequel for Codename: Diablo.

Altogether Codename: Diablo is exactly as advertised. It is an entertaining romp the will make you crack up pretty much non-stop, stimulate your action senses while delivering eye candy to the ultimate degree. I am so happy to have got to experience the 35 minute film on the big screen with some of the principals in attendance.

Believe it or not this was the first chance I ever got to see the 1983 originally released The Last Empire. I was pleasantly surprised at the quality of the film.

For some reason, I thought it was a prehistoric dinosaur movie with a bunch of scantily clad women running around, but it actually wasn’t. Instead it’s a Sci-fi fantasy film with crime elements and laughs to boot.

The story is about three beautiful women, who are members of a lost tribe, that must battle with an evil diabolical genius who has plans to destroy their “Lost Empire.” If they can some how win and find the sacred jewels that were stolen in the movie’s opening scene, they can can control their own destiny.
What really shocked me after was seeing The Lost Empire was that it was shot by Jacques Haitkin, the same Director of Photography that filmed Wes Craven’s legendary classic A Nightmare in Elm Street one year later.
Another surprise was noticing that the Special Animation Effects we’re done by Ernest D. Farino, who 12 months later handled the Graphic Animation Effects on James Cameron’s landmark The Terminator.
Plus there is a cool music score performed by Alan Howarth, John Carpenter’s co-composer at the time. His soundtrack for The Last Empire really echoed Escape from New York, so you gotta love that. Raven De La Croix was the person who suggested to pursue Howarth because she felt he might be available between projects with John Carpenter. Very smart move on her part.

Raven De La Croix was definitely a stunning woman in her prime. She has a very easy-going likeable quality to go along with her natural busty look. In person now, she’s changed quite about in the 34 years since The Last Empire was released (she’s now 70 years old), but she’s a truly caring woman who is nurturing and doing what she can to create healthy peace for all she meets.

De La Croix spoke after the movie about how she was cast originally cast in Russ Meyer’s movie Up, when she was noticed as a waitress in a restaurant. This led to her working with Russ Meyer and the other film work that’s been her career over 40 years since.

She’s actually quite terrific in the movie. Not only because of the way she looked, but how she projected such a likeable humoristic personality.

The rest of the movie is populated with some TV actors and some semi-famous thespians like Angus Scrimm from the Phantasm series, who plays the evil diabolical genius.
One of the pretty ladies I couldn’t help but notice was Linda Shayne, who played “MIss Salmon” in Humanoids from the Deep and the comedy Screwballs. It was really great seeing her again in a movie. Since steeping away from acting in 1994, she’s become a prolific writer/director for feature films and television.
All in all, I had got a kick out of watching the film, which has a love-story/comedy slant to go along with the science fiction action. Combine it with seeing Codename: Diablo that preceded it and it was just a blast.

After The Last Empire finished there was a question-and-answer session where Raven Da La Croix answered all the questions from the audience, then she signed merchandise.
After that we were able to meet with each of the three shapely actresses representing Codename: Diablo, which was not only nice on the eyes, but it was a real joy speaking to each one of the ultra-busty ladies.
I would highly recommend you see both films. Codename: Diablo is aiming to come on Blu-ray in December and you should track down The Last Empire on Blu-ray as well. You’ll have a laugh riot experiencing their harmless entertainment.